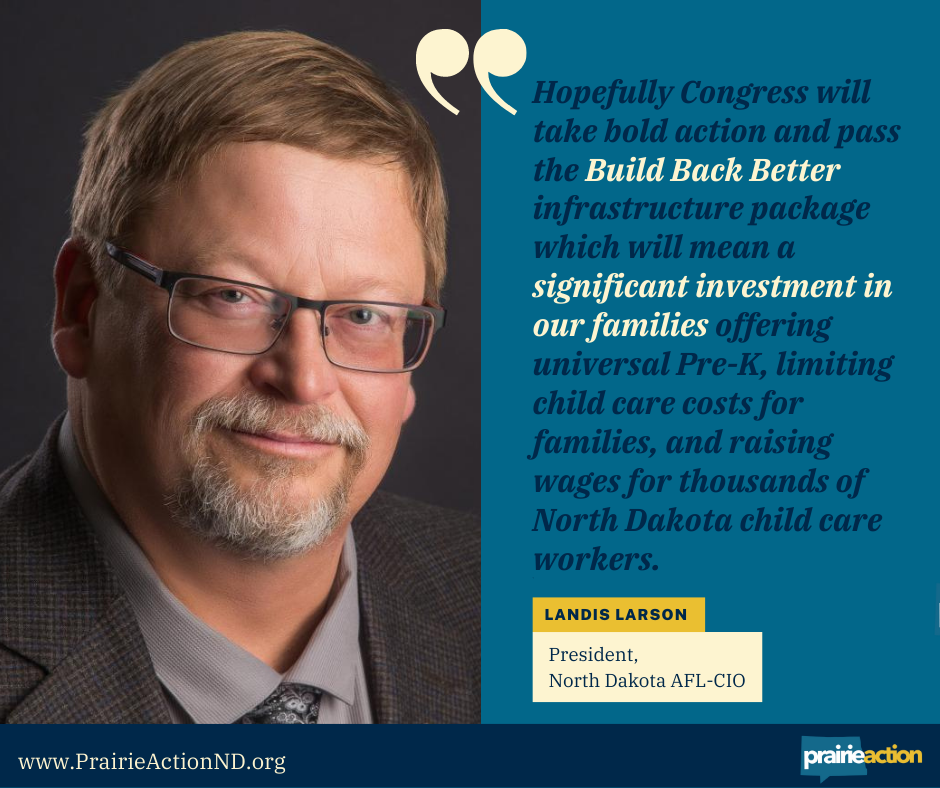 This special session was a missed opportunity to focus on what North Dakota working families need, with attention instead being spent on divisive social issues that have little to do with North Dakota.

During the special session the North Dakota AFL-CIO was part of a coalition of organizations urging the legislature to spend $130 million to improve the quality, quantity and affordability of child care in North Dakota. I personally testified in front of the legislature making the case that Gov. Burgum’s proposal allocating less than 2% of the federal American Rescue Plan Act fund toward the child care crisis was simply not enough.

I sit on the Workforce Development Council and child care is a consistent topic of discussion when it comes to what is holding back our workforce potential. Business and labor agree that we need to do something, and that something needs to be considerable.

At the root of the problem is a shortage of workers interested in working in child care. We can build all the new centers we want, but unless we are making an investment in the people who will care for the children in those centers, we just have more empty buildings with a “help wanted” sign out front.

Child care workers are in short supply due to some obvious reasons: low wages, few benefits, and almost no opportunities to advance into a career. In fact, according to a recent Kids Count study, child care workers earn a median wage of $11.61, barely enough to sustain themselves, little alone a family. Who can blame people for choosing other work?

We know that it’s not viable to raise costs on the parents who are already paying the equivalent of tuition at the University of North Dakota or North Dakota State University, per child. Unless providers are willing to divert some of their profit to make these workforce investments, the only solution left is for robust public investment.

We need bold action to make child care a viable choice for a career by boosting wages, education and career opportunities for working people interested in taking on one of the most important jobs in our economy.

Hopefully Congress will take bold action and pass the Build Back Better infrastructure package which will mean a significant investment in our families offering universal Pre-K, limiting child care costs for families, and raising wages for thousands of North Dakota child care workers.