Bans Off Our Bodies Rallies to be held across North Dakota 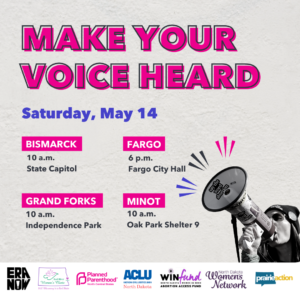 On Monday, May 2nd, Politico published a leaked draft Supreme Court majority opinion in Dobbs v. Jackson Women’s Health Organization that explicitly overturns Roe v. Wade. This is an unprecedented leak from the court that, if true, would reverse nearly 50 years of precedent and explicitly end federal constitutional protections for abortion. North Dakota has a trigger ban law which means abortion could be illegal in the state if the Supreme Court stands by its draft opinion. We are one of 26 states that could move quickly to ban abortion, meaning millions of people might live without local access to abortion.

It is necessary to act now to demonstrate that people in North Dakota and across the country support abortion access and we won’t back down. Please join us in showing the strength of the movement when we unite in solidarity at the Ban Off Our Body rallies this Saturday, May, 14th.

The Bans Off Our Bodies rallies will be held on Saturday, May 14th nationwide, including in all four corners of North Dakota, to send a clear message that the majority in this country support abortion and abortion access must be protected.

P.S. Help us spread the word! Share this post to your social media — The leaked Supreme Court decision makes it incredibly clear: we are at a crisis point for reproductive rights. If Roe falls, 26 states could move to ban abortion, incl. ND. For more info & to join us to fight back on May 14th:  www.ndwomen.org #BansOffOurBodies