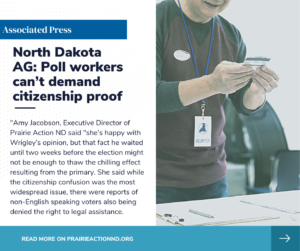 “Some poll workers in North Dakota who created confusion and frustration during the spring primary by allegedly demanding proof of U.S. citizenship particularly from immigrants and people of color had no power to do so, the state attorney general said.

Attorney General Drew Wrigley said in a five-page document released late Wednesday that North Dakota law does not require a voter to provide documents of citizenship in order to cast a ballot. Every voter is asked if they are a citizen and if they answer yes, they should be allowed to vote provided they have proper ID, Wrigley said.”

“While we are happy to see that the Attorney General concurs that no eligible voter should be asked to require additional citizenship documentation in order to vote, it is frustrating he waited until two weeks before the election to clarify the situation. This unwarranted request by poll workers during the June Primary election sent a chilling effect throughout New American communities resulting in many eligible voters never casting their vote. A swift opinion would have given election officials and civic engagement groups the time needed to rebuild trust and educate voters on their rights“.