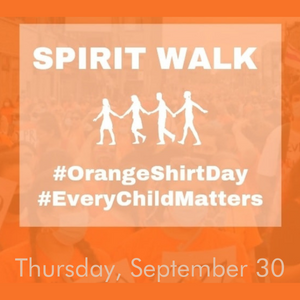 ORANGE SHIRT DAY NORTH DAKOTA, A MEMORIAL WALK PLANNED FOR BISMARCK
One of several events around the country honoring The National Day of Remembrance for US Indian Boarding Schools on September 30.

BISMARCK, ND – In May 2021, 215 graves were uncovered at Kamloops Indian Boarding School in British Columbia, Canada. The bodies of indigenous children who attended that boarding school, some as young as three, can finally return to their homelands. Thousands more indigenous children’s bodies have been recovered in Canada and in the United States. These recent discoveries have brought forth old, painful wounds by many boarding school survivors. The pain of those memories was a call to action for a group of local women from several area tribes who call their organization “Orange Shirt Day North Dakota”. Several communities in North Dakota are organizing other local events in honor of the “National Day of Remembrance for US Indian Boarding Schools” on September 30.

No Indigenous family is untouched by the trauma of boarding school. Spirit Walk: Orange Shirt Day North Dakota was created to bring awareness to the cultural assimilation of indigenous children and the rampant abuse at the hands of school officials. 12 Indian boarding schools were in operation in North Dakota from as early as the 1880s to the 1940s and even later. In Bismarck, it was the Bismarck Indian school, which is now Fraine Barracks, the state headquarters for the North Dakota National Guard. It operated as a boarding school in 1908 to 1919, then again as an all-girl boarding school from 1922 to 1937. What occurred within the walls of most boarding schools is a crucial part of the damaging phenomenon known as “intergenerational trauma”, a phenomenon which scholars have shown affected not only the survivors of boarding schools but also the generations that followed.  According to the National Native American Boarding School Healing Coalition, by 1926, more than 80% of Indigenous school-age children were attending boarding schools that were run either by the federal government or religious organizations.

The Spirit Walk and the day’s events are highlighted here:

The Oceti Sakowin Runners are creating awareness for Indian Boarding Schools as they relay from Cannonball to Custer Park earlier in the morning. Swan AmericanHorse, Standing Rock, organizing the runners, says “We are still here.  We have to be a voice for the children who were silenced so many years ago .” Other area groups have organized efforts to join the runners and make their way to Bismarck to partake in the spirit walk. The most poignant piece of the spirit walk will be the riderless horse in honor of the children who never made it home. This will be seen during the Spirit Walk to the Capitol.

Organizer Melanie Moniz, Nueta from MHA Nation, says of the Orange Shirt Day North Dakota organizers, “We are a collective of Indigenous advocates, artists, activists, community organizers, and “mocs on the ground” leaders from various tribal nations and communities throughout North Dakota. We are committed to raising awareness, creating avenues of healing, and doing our part to contribute to this new era of truth that will bring healing to our relatives and loved ones past, present, and future”.

It’s no coincidence that Orange Shirt Day North Dakota and the Spirit Walk fall on September 30, the National Day of Remembrance for US Indian Boarding Schools. It’s also a day of remembrance in Canada since 2013. “We stand with our relatives in the North who commemorate Orange Shirt Day. Our hearts grieve with them as we share in this living pain,” said organizer and artist Agnes Woodward, Kawacatoose First Nations of Canada, now living with her family in New Town, ND.

Organizer and artist, Moriah Crow Eagle from Peigan Nation, Southern Alberta Canada, says “We do this work for the ones who never made it home, the survivors living with this pain, for all of our children, and for the ones who have yet to come.”

Moriah Croweagle will offer a moving art display at the capitol steps. Other artists have been invited to share their pieces.

The group has organized several fundraising options to ease the costs of the day’s events. The rest of the proceeds will go to the National Native American Boarding School Healing Coalition.

All events will be socially distanced and masks are highly encouraged.