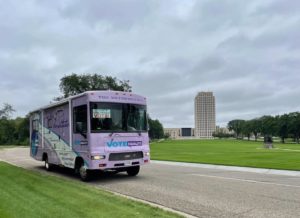 VoteEqualityUS has been advocating for equality representation from all 50 states with the hope that one day the ERA will make its way into the U.S. Constitution, for which there has recently been a renewed effort in Congress. The tour will travel through states to educate voters on the importance of voting for equality candidates in the upcoming elections. VoteEqualityND is a nonpartisan grassroots coalition promoting equality for all Americans and is seeking to add an Equal Rights Amendment to the N.D. Constitution.

There is a renewed fight for equality in North Dakota in light of recent events in the state legislature. “During the 2021 session, North Dakota legislators turned back the clock on equality by passing SCR 4010, a resolution stating North Dakota’s 1975 ratification of the ERA was no longer valid,” according to Kristie Wolff, Executive Director of North Dakota Women’s Network. “We must stand firmly and speak loudly and clearly for equal protections regardless of gender. This is why we’ve partnered with VoteEqualityUS to bring their moving billboard to North Dakota.”

“We have an historic opportunity to fix our Constitution so that ‘justice for all’ means all of us. We’re doing everything we can to make sure the message of gender equality is heard loud and clear,” said Kati Gunkelman Hornung, Co-Founder and Director of Vote EqualityUS. “Gender equality is NOT in the U.S. Constitution, but the 28th Amendment (Equal Rights) will fix that. VoteEqualityUS is bringing this message to voters with our travelling billboard.”

50 years later, many who stood firmly and spoke loudly in the 1970’s are still showing up, standing up, and speaking up for equality for all. “My efforts to support gender equality and North Dakota’s ratification of the Equal Right Amendment began in 1975. The time is long past to ratify the 28th Amendment to the U.S. Constitution,” said Thomasine Heitkamp, Co-Founder of ERA NOW. “Please join us in finishing the fight for gender equality.”

The Notorious RVG, will park in open, outdoor forums where non-partisan community volunteers will answer questions and talk about what we need to do to enshrine gender equality in the U.S. Constitution. Tour stops are continuously updated, and VoteEqualityUS and VoteEqualityND have all the information about the tour and related campaign efforts. “Follow us on social media to see where to find The Notorious RVG or just keep your eyes open. We’re going to be the folks in the bright purple RV. We’ll be hard to miss,” said Jess Kujala, RVG driver and VoteEqualityUS Co-Founder