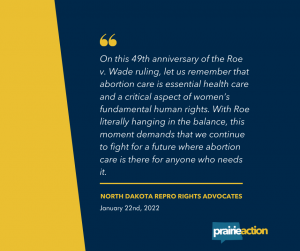 On January 22nd of 1973, the U.S. Supreme Court ruled on Roe v. Wade, the landmark decision that secured the right to abortion. Since then, courts – including the Supreme Court – have repeatedly held that states cannot infringe upon a person’s right to terminate a pregnancy prior to viability. Alarmingly, by early summer, the high court could erase nearly 50 years of precedence by overturning Roe, leaving personal reproductive decisions up to state politicians.

Politicians have been working for decades to make abortion as difficult as possible to access. This includes forcing people to travel long distances to obtain care, mandating forced waiting periods and banning insurance coverage of abortions, just to name a few barriers.

If Roe v Wade is overturned, state politicians will have the power to decide if abortion will remain legal or not. North Dakota is one of twelve states with a trigger law on the books. This would automatically ban abortion within 30 days if Roe v Wade is overturned. Red River Women’s clinic, the sole abortion provider in the state, would be forced to close. This would leave the most vulnerable in our region including rural people, low income people, Black, Indigenous and other People of Color without access to abortion in the state in which they live.

Without abortion access, we can expect an increase in maternal injuries and deaths. When policies limit access to abortion, that doesn’t end abortion. It ends SAFE abortion. Also, the hands of physicians would be tied, leaving them unable to follow evidence-based protocols to treat patients with certain conditions including preeclampsia, heart conditions and ectopic pregnancies.

For decades, Americans have consistently supported access to safe and legal abortion; the opposite of what anti-choice politicians would lead one to believe. That holds true even here in North Dakota. In 2014, when voters in this state were asked to ban abortion through a ballot measure, they soundly rejected the measure by a 2:1 margin. Americans – including North Dakotans – want abortion to remain safe, legal and accessible in their community.

On this 49th anniversary of the Roe v. Wade ruling, let us remember that abortion care is essential health care and a critical aspect of women’s fundamental human rights. With Roe literally hanging in the balance, this moment demands that we continue to fight for a future where abortion care is there for anyone who needs it.